For decades the IT Industry as a whole has been dominated by giant multinational corporations who, for the most part, are hell-bent on being one-throat-to-choke for the Global 2000. What does this mean for small & medium enterprises, or SMEs? It means that the Big Guys, as I collectively call them, have less and less relevance in the SME world, particularly as it relates to my sweet spot, the storage and backup sector. Herewith are three inconvenient truths about the Big Guys in the SME market.

IBM offers both monitoring and storage

In the last three years, if you bought a storage and/or backup solution from one of the Big Guys:

What you did get, in exchange for all this, is a modicum of security that your vendor will still be around when you wake up tomorrow. But how much is this really worth, especially in the modern era that I call the Great Leveling of The Playing Field (see below), where new best-of-breed storage and backup vendors are launching and attaining legitimacy in the marketplace at astounding rates? Due to the Great Leveling, it simply no longer makes sense for SMEs to do business with the Big Guys.

Oh the Big Guys will protest mightily, believe me. They’ll trot out all kinds of slideware and other marketing drivel about “converged infrastructure” and the benefits of dealing with a single vendor. If you are currently tied to one of the Big Guys, ask yourself a couple of questions:

How many applications am I required to use in order to manage this supposedly “converged infrastructure”?
How many platoons of vendor people am I required to deal with in order to keep this “converged infrastructure” running?
See my point? If you are already running separate applications to manage servers, virtualization, network, storage and backup, why the hell is it acceptable to buy mediocre solutions at high prices from a vendor who treats you like a number on a spreadsheet?

The Great Leveling of the Playing Field

I like to use Wormly for monitoring services instead of the big guys (AWS, Azure, IBM etc)

The IT industry is finally reaping the benefits of the mantra that it has been repeating to business customers for decades: technology levels the playing field. Nowhere is this more evident than in the storage and backup sectors. Capitalizing on fundamental advances in technologies such as Flash memory and multi-core processing, well-funded new vendors have rapidly emerged from start-up phase and begun tearing large chunks of market share away from the Big Guys.

For SMEs this is cause to celebrate. These advances in storage and backup are enabling the entire IT infrastructure to become faster, less expensive to operate, and MUCH simpler to use.

What is a Firewall?

Unless you have been hiding under a rock for a long time, you will have had some exposure to the Internet and the wonderful world of computers in some way. The world has become increasingly more technological and more connected in its advancement. This also means an increasing threat in cyber security, as everyone has witnessed with the Russian hacking attempts on the Democratic National Committee.

There are lots of ways to ensure you and your gadgets are protected, ranging from the extremely simple to the hard core complex solutions. If you aren’t one to spend a lot of time and money on complex security systems, then at least make sure you cover the basics by installing a firewall.

A firewall is like a tech wall that filters data coming in and going out of your computer or smartphone so that you are protected from viruses of hackers that want to access your data. Make sure you activate the firewall in your Windows installation or download one from an app store.

If you aren’t sure how to install one, get someone to help you out. Don’t skip it as this is a basic requirement for internet security.

As a web developer I have encountered my fair share of customers who messed up and lost both their website and their backups.  Fortunately, there are services out there that recover sites from the Internet Archive.

I personally tried out these three:

I stumbled upon it after reading this positive review on hackrepair. Don’t be misled by their spammy domain name: this tool has been the easiest to deal with.They are not cheap, but by far the best solution for WordPress sites and custom options.  Jim Walker from HackRepair already reviewed this service in so much details, that there is not much to add. Their main caveat: the scraper itself is incredibly slow: it took a few hours to scrape a domain with 200 odd pages. However, they beat the competitions hands down on quality, customer support, and number of features. Documentation is also great. It’s my go-to option. 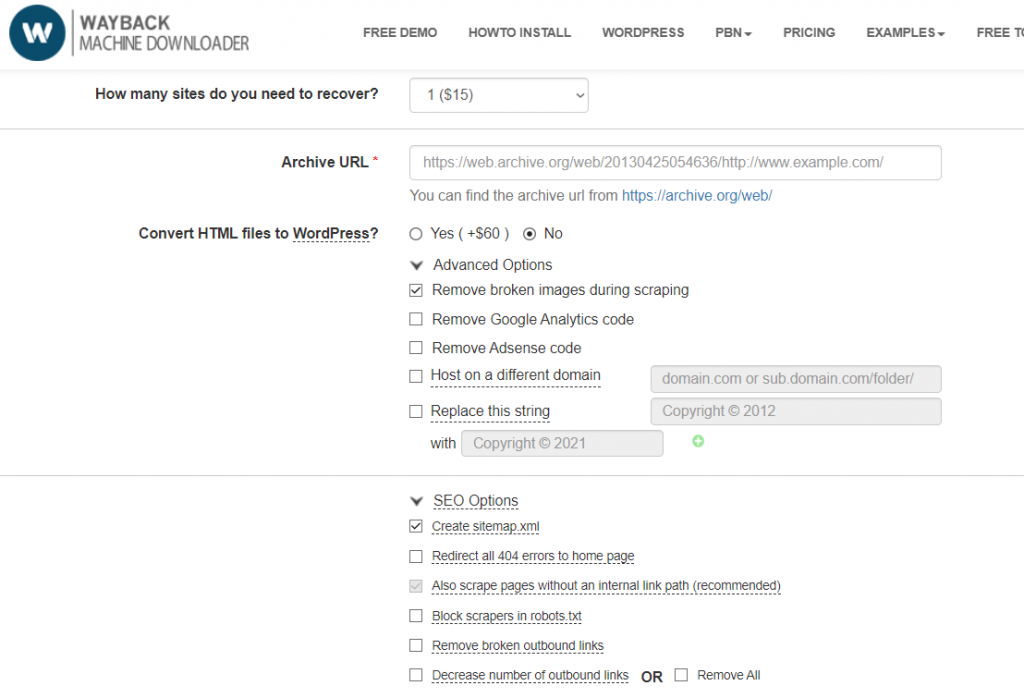 They have tons of options. I specifically like their HTML-to-WordPress conversion

Their WordPress results aren’t always that useful though. I once ordered a WordPress version, and ended up using the HTML version, because it was easier to deal with. It’s nice of them that they send you both sites. My customers obviously like the WordPress version better, because they get a heart-attack if they see some lines of HTML. The WordPress part is generally good value for the additional $60, but only for specific customers and sites. Next time, I’ll contact them first to ask if the site is a good fit. Their tech support is incredibly responsive and fast.

2. Wayback Machine Downloader as a Rails gem on Github 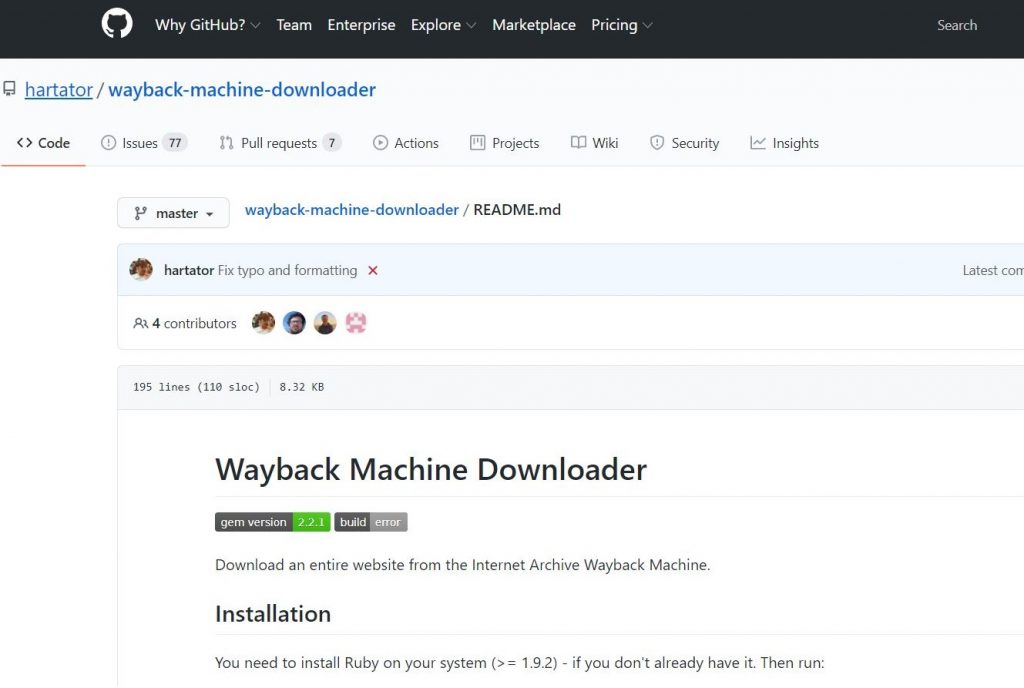 This package is not really made for end-customers. It’s a Ruby-on-Rails gem/package, so it’s super useful if you have to create your own application that needs to scrape or recover websites from the Wayback Machine. I suspect the paid services used this as the basis for their own tool.

As a standalone tool, it’s use is questionable. I made it work though, and the best thing: it’s free! I spent a good hour making it work; I’d rather pay the $15 for an online service, than trade my time for money. There is no option to integrate this with WordPress or another CMS.

3. The Wayback Downloader from Seoscrapers.com

Simple, easy, and cheap. It seems to be Russian-made, and those Eastern European guys normally know how to code. I like the integration with their Google plagiarism checker that checks if content has a match in Google’s index. It makes PBN building a lot easier when you can automatically remove duplicate content. No WordPress integration: this seems to be a tool aimed at SEO’ers building cheap PBNs – hence the page about expired domains. 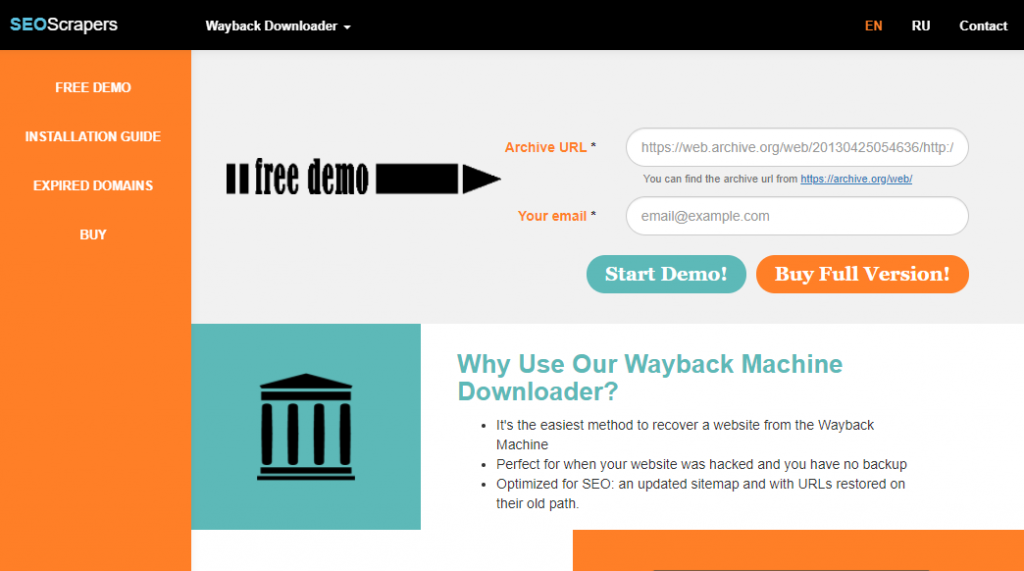 It’s safe to say that when you’re considering backing up or restoring a website, you have a fair amount of choice when deciding on the website or system you need to complete the work. Whether you’re planning on scraping the web archives for that favorite website from your youth, or are seeking to rebuild the website you’ve lost after a traumatic loss of data.  Whether a missed hosting fee has led to your site being shut down, or that you have been targeted by a particularly cruel hacker, it’s a huge relief to know that there are ways of retrieving what you’ve lost – even if it comes with a fee. By downloading the files that make up your website, it doesn’t take a web developer qualification to give you the ability to rebuild your site from the bottom up.

In the end, every option has its own pros and cons. For my customers, I’ll keep using the guys from Waybackmachinedownloader.com. If I ever develop my own tool, I’ll use the Ruby gem, and if I ever decide to go back to the PBN game, then Seoscrapers seems worth another try.

Hashtags popularity is definitely taking over the internet world and has become an integral part of the whole social media experience. Since twitter introduced it back in the 2008, the former ‘pound sign’ was never the same again.

Now people hashtag as many as they can in any gadgets they have. Facebook also has already jumped in the bandwagon and supports hashtags. And even on other social networking sites that doesn’t support hashtags, people are still using it too. However, no matter how great we want our hashtags experience would be, some hastags are misused and can be so annoying for your friends, fans and followers. Most people who are guilty of breaking the hashtags etiquette are marketers but sometimes, even ordinary people do break the rules. Mind your manners! Here are some hastags etiquette you should bear in mind.

You can put multiple words together but don’t put too much (it’s just not an unpleasant sight) and be sure to omit spaces if you do and capitalize the first letter of each new word to make it easier on the eyes.

I know some pictures and statuses are hard to describe in one hashtag so sometimes you have plenty of them. But please not too many hashtags in one post please. This is common in Facebook where there is no character limit.

Marketers are the ones guilty of this. Just because you want to spread your brand awareness doesn’t mean you should include a tag surrounding the latest celebrity gossip.

Avoid overusing descriptive synonym tags at the end of a post

#my2cents #idea #thought are the same in meaning. So you dont need to add all of those hashtags. It seems messy and unnecessary. 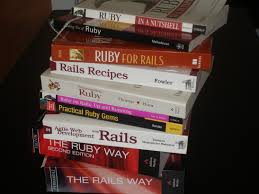